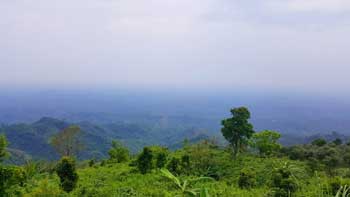 A very beautiful mosque of the city is situated at Mahuttuly on Abul Khairat Rd; just west of Armanitola Govt. High School. Architecturally faultless (Mughal style) is a five-dome mosque with hundreds of big and small twinkling stars as surface decorations. The stars have been created by setting pieces of chinaware on white cement. Seen from the front and from far it looks as if shining above the surface of the earth.

The inside of it is even more beautiful that the outside, lovely mosaic floor and excellent tiles with many floral patterns set on the walls, are all in complete harmony. The sitara Masjid was built originally with three domes in early 18th century by Mirza Ghulam Pir, a highly respectable Zamindar of Dhaka. Frequently used in calendars. Entrance: through a lane named after the mosque.

Baitul Mukarram Mosque is situated at Purana Paltan east of Bangladesh Secretariat and north of Dhaka Stadium. Largest Mosque in the city, three storied and built after the pattern of the Kaba Sharif. Very beautiful and costly decorations in the interior. Long lawn, garden and rows of fountains to the south and east.

The mosque is on a very high platform. Lovely flight of stairs lead to it; from the south, east and north. On the east is a vast varanda which is also used for prayer and Eid congregation. Below in the ground floor is a shopping centre.

In mid-15th century, a Muslim colony was founded in the inhospitable mangrove forest of the Sundarbans near the sea coast in the Bagerhat district by an obscure saint-General, named Ulugh Khan Jahan. He was the earliest torch bearer of islam in the South who laid the nucleus of an affluent city during the reign of Sultan Nasiruddin Mahmud Shah (1442-59), then known as 'khalifalabad' (present Bagerhat).

Khan Jahan aborned his city with numerous mosques, tanks, roads and other public buildings, the spectacular ruins of which are focused around the most imposing and largest multidomed mosques in Bangladesh, known as the Shait-Gumbad Masjid (160'X108'). The stately fabric of the monument, serene and imposing, stands on the eastern bank of an unusually vast sweet-water tank, clustered around by the heavy foliage of a low-laying countryside, characteristic of a sea-coast landscape.

The mosque roofed over with 77 squat domes, including 7 chauchala or four-sided pitched Bengali domes in the middle row. The vast prayer hall, although provided with 11 arched doorways on east and 7 each on north and south for ventilation and light, presents a dark and sombre appearance inside.

It is divided into 7 longitudinal aisles and 11 deep bays by a forest of slender stone columns, from which springs rows of endless arches, supporting the domes. Six feet thick, slightly tapering walls and hollow and round, almost detached corner towers, resembling the bastions of fortress, each capped by small rounded cupolas, recall the Tughlaq architecture of Delhi. The general appearance of this noble monument with its stark simplicity but massive character reflects the strength and simplicity of the builder.

One of the most graceful monument of the Sultanate period is the Chhota Sona Masjid or Small Golden Mosque at Gaur in Rajshahi Built by one Wali Muhammad during the reign of Sultan Alauddin Husain Shah (1493-1519). Originally it was roofed over with 15 gold-gilded domes including the 3 Chauchala domes in the middle row, from which it derives its curious name.

Of a slightly later date the elegant 6-domed mosque (43'x36') of Baba Adam in Rampal near Dhaka was erected by one Malik Kafur during the reign of the last llyas Shahi Sultan, Jalauddin Fateh Shah in 1483 A.D. It displays the same characterstic features of the period such as the faceted octagonal turrets at 4 corners, the curved cornice, the facade and 3 mihrabs relieved richly with beautiful terracotta floral and hanging patterns.

The Shrine of Hazrat Shah Jalal:

Among the several places of historical interest in Sylhet town is the shrine of Saint Hazrat Shah Jalal. Even today, more than six hundred years after his death, the shrine is visited by innumerable devotees of every caste and creed, who make the journey from far away places. Hazrat Shah Jalal is credited with the help extended to the Muslim army which conquered Sylhet in 1303 A.D.

Situated on a hillock in Nasirabad, about 6 km. to the north-west of Chattogram town, this shrine attracts a large number of visitors and pilgrims. At its base is a large tank with several hundred tortoises. Tradition has it that these animals are the descendants of the evil spirits (genii) who were cast into this shape because they incurred the wrath of the great saint who visited the place about 1,100 years ago.

The shrine of Shah Amanat is another place of religious attraction. Located in the heart of the town, the shrine is visited by hundreds of people everyday who pay homage to the memory of the saint who lived in the 19th century.