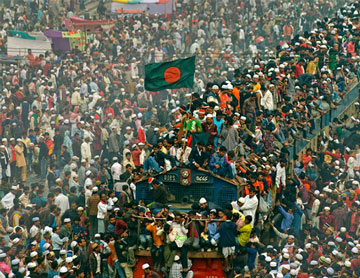 The official language is Bangla, sometimes called Bengali. It is the first language of more than 98 percent of the population. It is written in its own script, derived from that of Sanskrit. Urdu is the language of several hundred thousand people, many of whom emigrated from India in the late 1940s.

The UNESCO has declared 21st February as The International Mother Language Day to be observed globally in recognition of the sacrifices of the Bangla language martyrs who laid their lives for establishing the rightful place of Bangla. The proclamation came in the form of a resolution unanimously adopted at the plenary of the UNESCO at its headquarters in Paris in November 1999. In its resolution the UNESCO said-' 21st February be proclaimed International Mother Language Day throughout the world to commemorate the martyrs who sacrificed their lives on this very day in 1952’.

It is a great tribute and glowing homage paid by the international community to the language martyrs of Bangladesh. The genesis of the historic Language Movement which ensued since September 1947 with the students in the vanguard backed by intellectuals, cultural activists and patriotic elements was the first spurt of Bangalee nationalistic upsurge culminating in the sanguinary events of February 21, 1952 and finally leading to the war of Liberation in 1971.

The UNESCO in its resolution said-the recognition was given bearing in mind that all moves to promote the dissemination of mother tongues will serve not only to encourage linguistic diversity and multilingual education but also to develop fuller awareness about linguistic and cultural traditions throughout the world and to inspire solidarity based on understanding, tolerance and dialogue.

Henceforth UN member countries around the world will observe 21st February as the International Mother Language Day. The historic 21st February has, thus, assumed new dimension. The sacrifices of Rafiq, Salam, Jabbar, Barkat and other martyrs as well as of those tortured and repressed by the then authoritarian government of Pakistan for championing the cause of their mother tongue have received now a glorious and new recognition by the November 1999 resolution of the UNESCO.